For the bone density measurement method for clinical use, dual energy x-ray absorptiometry (DXA) is most widely used, and there are various other methods such as quantitative computed tomography (QCT), ultrasound, etc.

As to postmenopausal women and men over 50, osteoporosis is diagnosed according to T-values, and infants, adolescents, premenopausal women and men under the age of 50 are judged by Z-values.
If the T-value is less than -2.5, osteoporosis is diagnosed, and -1.0 to -2.5 will be determined as osteopenia. If the Z-value is less than -2.0, it is defined as ‘below the expected range for age’ and the possibility of secondary osteoporosis should be considered. 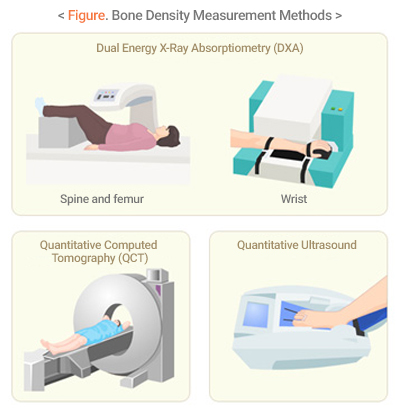